Bp. Mark Seitz, auxiliary of Dallas, is the new bishop designate for El Paso. At this moment he is giving his speech of introduction at the pastoral center. He says he has one bias: “the preferential option for the poor.” He also wants to help victims affected by clergy sexual abuse.

Bp. Seitz looks forward to meeting the priests and deacons of the diocese and to work as brothers. He also identifies the religious women and all those doing ministry in the diocese. He says “You will be my teachers…and to work in collaboration.”

Pope Francis belongs to the Society of Jesus, known as the Jesuits. Become familiar with the magazine America at this link.

What were your first reactions when you heard the announcement of the new pope?

Pope Francis I — A message from the Jesuit Superior General

Digital News Service SJ
Vol XVII, No. 6 | 14 March 2013
STATEMENT OF THE SUPERIOR GENERAL OF THE SOCIETY OF JESUS
In the name of the Society of Jesus, I give thanks to God for the election of our new Pope, Cardinal Jorge Mario Bergoglio, S.J., which opens for the Church a path full of hope.
All of us Jesuits accompany with our prayers our brother and we thank him for his generosity in accepting the responsibility of guiding the Church at this crucial time. The name of “Francis” by which we shall now know him evokes for us the Holy Father’s evangelical spirit of closeness to the poor, his identification with simple people, and his commitment to the renewal of the Church.
From the very first moment in which he appeared before the people of God, he gave visible witness to his simplicity, his humility, his pastoral experience and his spiritual depth.
“The distinguishing mark of our Society is that it is . . . a companionship . . . bound to the Roman Pontiff by a special bond of love and service.” (Complementary Norms No. 2, § 2) Thus, we share the joy of the whole Church, and at the same time, wish to express our renewed availability to be sent into the vineyard of the Lord, according
to the spirit of our special vow of obedience, that so distinctively unites us with the Holy Father (General Congregation
35, Decree1, No. 17).

Vacancy and Opportunity: Redefining the Chair of Peter

I returned to El Paso a few days ago and my thoughts keep returning to Rome. I ask myself: Is this the time to reflect on the ministry of the Pope, on the Chair of Peter? We find ourselves in an unusual circumstance. This vacancy creates an opportunity to ask other questions.I have two ideas to propose.

1) In an earlier post I did a reflection on St. Peter’s Basilica and the piazza as a theology in stone. The Basilica represents Christ the Head, with the Eucharist as its spiritual heart and with the piazza as the gathering place for humanity, embraced by Mother Church. Is this an adequate description? I no longer believe so. What matters is what is underground, the archeological site called the Scavi, upon which the Basilica sits: the presumed tomb of St. Peter. Here is where the theology begins: martyrdom, witness, and transformation. A certain naivete is caught up with the Basilica if we forget the blood shed by so many Christians. This thought of martyrdom is everywhere in Rome, if one knows how to be aware and knows how to see. This awareness of bloodshed and violence is what struck me when I first visited Rome several years ago. I am also aware of how easy it is to fall into a spiritual amnesia. Back to the point. The architecture of St. Peter’s highlights only one aspect of a theology of Church in stone. The foundational theology begins underground with a tomb of bones. The insight of looking at the tomb of Peter as the starting point for reflection came to me while I was reading Olivier Clement. This is the second point.

2) Clement is an Orthodox theologian at the Institute of St. Sergius at Paris. He has taken seriously John Paul II’s encyclical Ut unum sint as an invitation to further theological dialogue between the Orthodox and Catholic Churches. Clement wrote the book You are Peter: An Orthodox Theologian’s Reflection on the Exercise of Papal Primacy as a response to this invitation. It is my belief that we need to begin to take seriously a new dialogue with the Orthodox Church so that new light can be shed on the meaning of the papacy for the 21st century. We need to re-examine everything: the Pope as “first among equals,” episcopal conferences, how bishops are chosen, and new procedures for electing the Pope. It is time to listen to what the Orthodox theologians have to say and put into effect the spirit of the encyclical Ut unum sint. This is a moment of opportunity and kairos. We have a choice as a Church: turn our eyes to the tomb of Peter underground or to be dazzled by a basilica of slate and Bernini stone.

Today Pope Benedict XVI leaves office and I return to Texas. Much has taken place over the past few weeks. Much is still in the future. What remains we can only anticipate. Rumors fly around in abundance as to why the pope has resigned from his office of ministry. I prefer to take him at his word that it is for reasons of health and age.

If there is one idea I would like to leave this blog with, it is about the ministry of bishop. Bishops are called to be pastors of the Church. That means they are to be close to the people and know their needs, struggles, joys, and hopes. Bishops are not CEO’s, nor are they vicars of the Pope. The Church is not a transnational corporation; it is a mystery, first and foremost. It is a kind of mixture, of the good and the bad, grace and sin. The grace dimension is her sacraments and scriptures; the sinful dimension is the human part in which institutions are its expression. It is this human and sinful aspect that needs reform, conversion, and ashes. In short, this is our world.

The Church exists only IN THE WORLD. There is no other. The world is the home of the people of God. It is not a place to run away from and hide in some sort of imaginary past that never existed. The Church must engage the world if it is to become credible and find its voice in the political sphere of human life. Church leaders can never demand credibility; it must be proven first. The first step a bishop can do is to heed the advice of St. Cyprian of Carthage (d. 258): “Bishops must first become learners before becoming teachers.”

I pray that our bishops, including the new bishop of Rome, learn to learn, learn to hear the voices of the poor and marinated, before they teach Gospel living which transforms the world.

(Fr. Bob in Bracciano, near Rome) 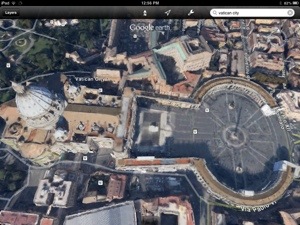 Has anyone wondered why St. Peter’s is built the way it is? Churches, in general, tend to portray a theology in stone (Philip Sheldrake has written books on the subject). St. Peter’s has a theology of Church, as well. Imagine a visitor walking into the basilica. The basilica itself is massive and extremely impressive. It is the place where the liturgy of the Eucharist is celebrated. What one notices immediately is the presence of people from times past, either in marble sculpture or tombs of saints and popes. One steps into a time warp of a community of past and present. The visitor is dwarfed by space and sun’s rays streaking from the ceiling. The basilica is a meditation in stone, created by human hands, lifting the mind and heart in awe.

The visitor now leaves the basilica and down the Via Conciliazione the eye looks beyond the fortress Castel San Angelo to the horizon of the city, with the Tiber flowing on the right. But immediately before the basilica is another form of architectural space created by the Bernini columns. These columns, or arms of stone, stretch outward and then inward, like the embrace in love or Mother Church. The psalms speak of a mother hen gathering its chicks; other commentaries evoke the image of a ship coming into safe harbor. The poet Robert Browning described it:

This space in between the columns is a reality not reflected upon that much. Yet, in this space is the Church gathered, the People of God, whose heart beat is found in the Eucharistic liturgy. “Eucharist and people gathered” is the theology in stone that reminds us who we are and what we are about.

In an earlier post I reflected on the presence of the Holy Spirit at the time of the election by cardinals. In the space of the people gathered, the Spirit is present in minds and hearts. Each individual is given a gift or talent to use for the build up of community and transformation of the world. These gifts and charisms are unique and necessary. Discipleship is not just for those who hold an office and are ordained; all are called to ministry in one way or another. All are called to effect change in the world. This is what baptism is all about: a commitment to justice and holiness.

Imagine a St. Peter’s without the piazza. It would look quite ridiculous. An absurd theology of administrative offices! It would portray and religion and a church closed in on itself from the world. It is closed because it has nothing to say.

As the cardinals move into conclave to choose the next spiritual leader of the Church, we are reminded of another, but open-ended conclave, of the symbolic space between the Bellini arms of the piazza in which we all stand and the Spirit moves in freedom. It is not a mistake that two huge water fountains are in the piazza — baptism? Call to holiness? Life in abundance?

There is something bigger here. And it is written in stone.

What will US cardinals Mahony and Dolan do?

Lenten purification? It begins at the level of conscience.

The Holy Spirit is fire

In this historic moment of papal election, the Holy Spirit, according to Catholic belief, is mixed into the process, for the lack of better words. The human and divine come together. In the previous post, the Spirit is described as color and a wind that “blows wherever it wills.” The divine presence inspires awe, beauty, harmony, and freedom.

Another metaphor of the Spirit is fire, like the sunset or dawn. Fire is energy. It burns and purifies. What needs burning and left in ashes? What needs purification? The fact that the papal elections are taking place during Lent is significant. The Lenten wings of the Spirit hover over the ashes of the world, breathing over embers of consciences, to usher in a new dawn.

A new solar wind is possible. It happened once before. Fifty years ago in Rome.

Posted in Uncategorized | Leave a comment
Robert Dueweke in Rome
Create a free website or blog at WordPress.com.